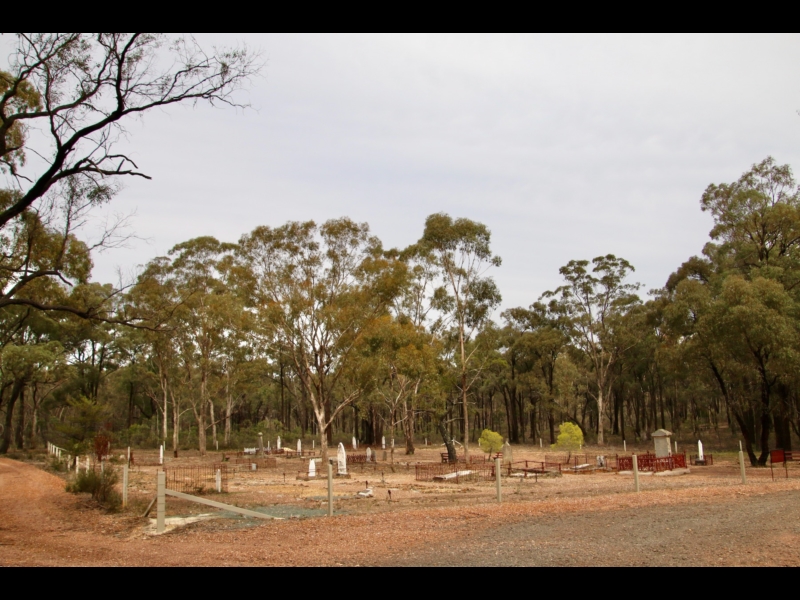 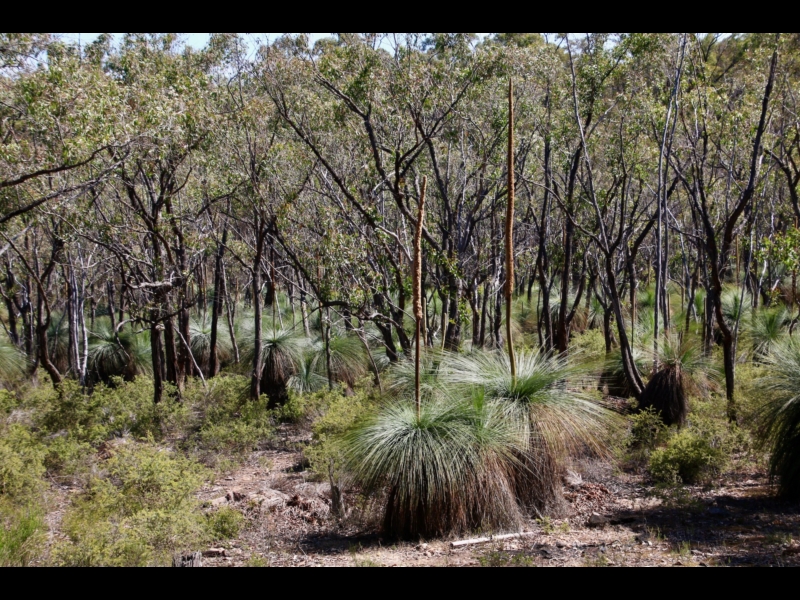 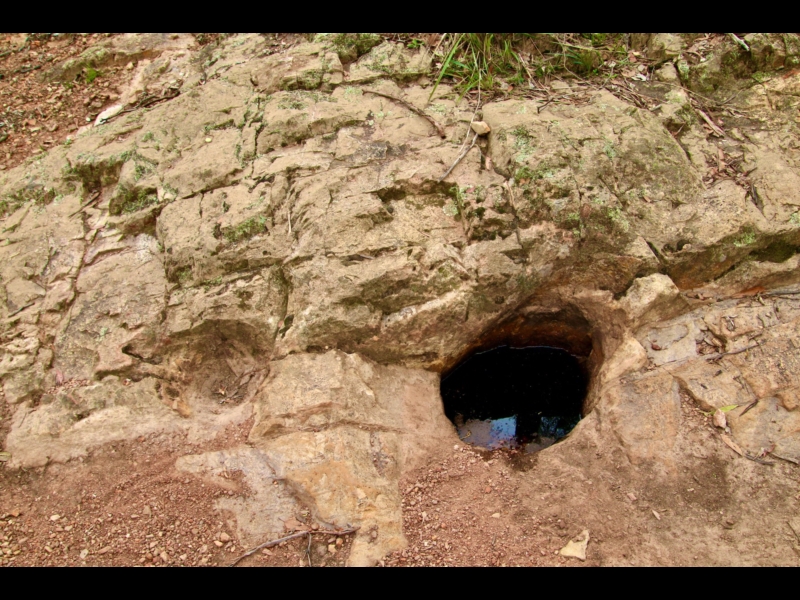 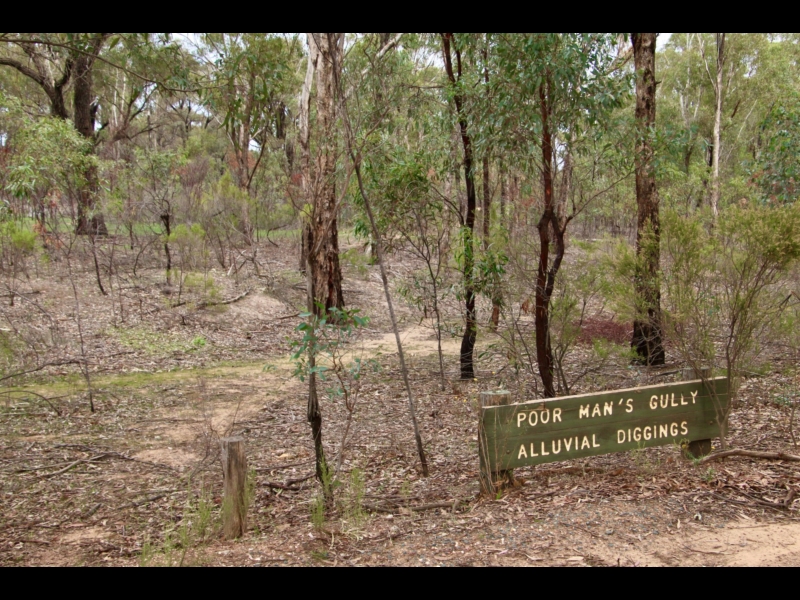 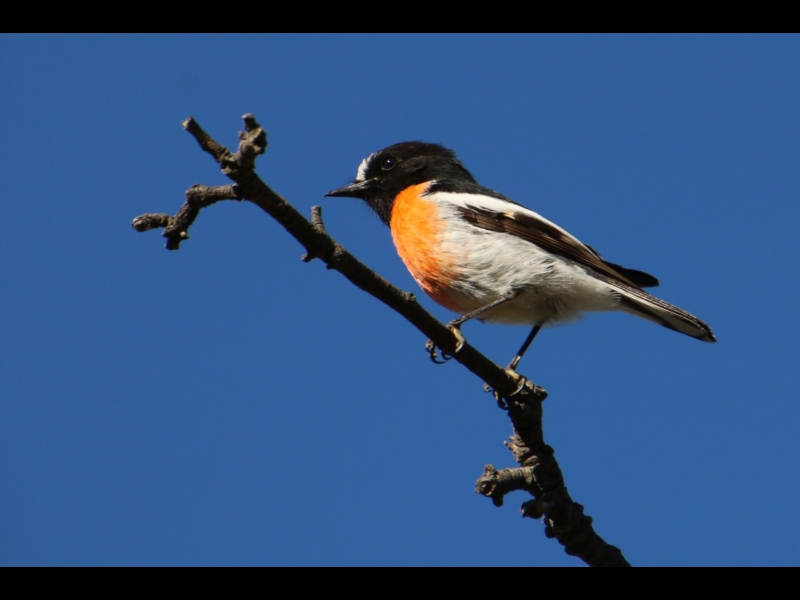 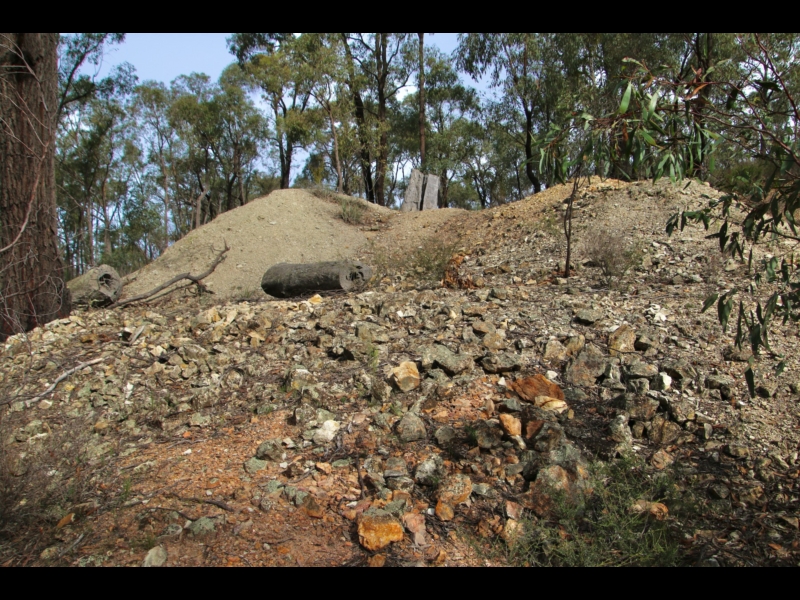 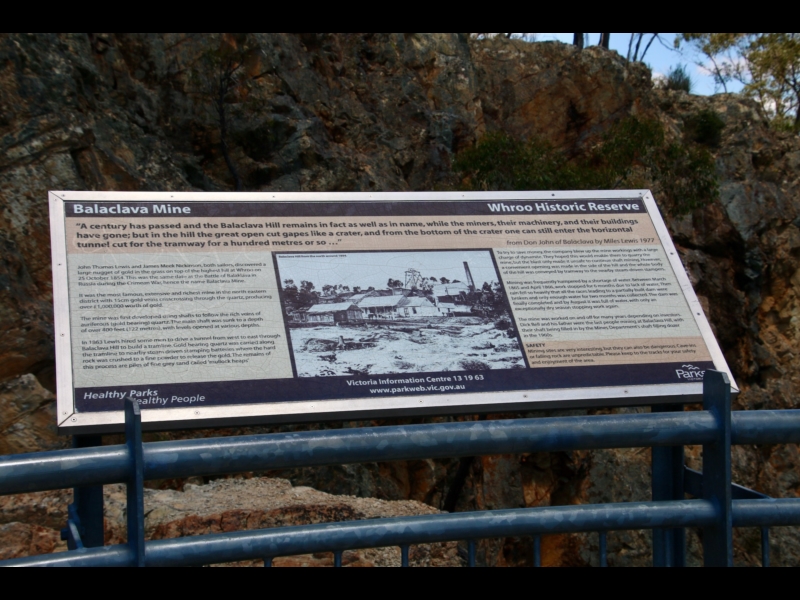 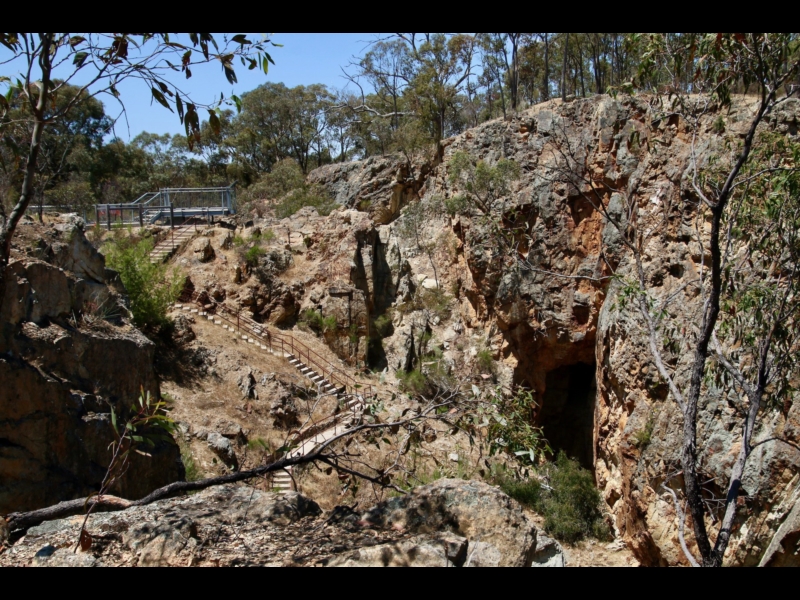 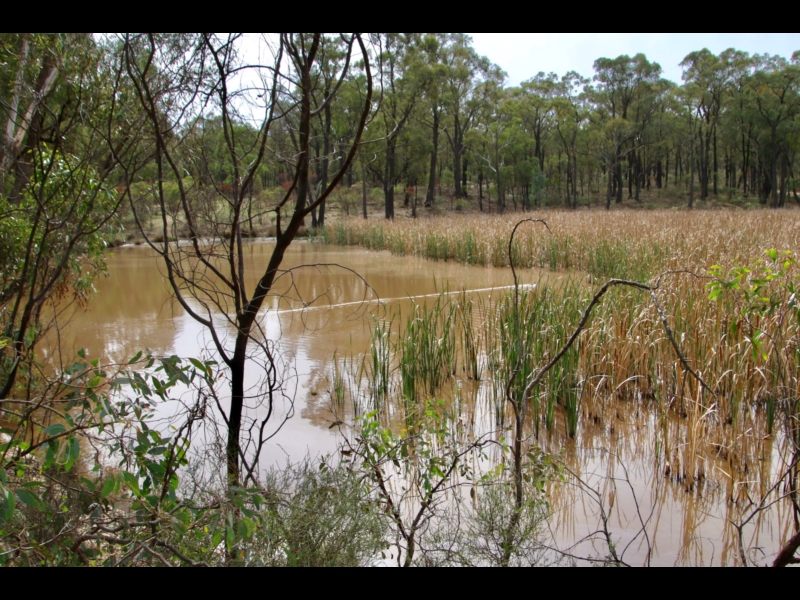 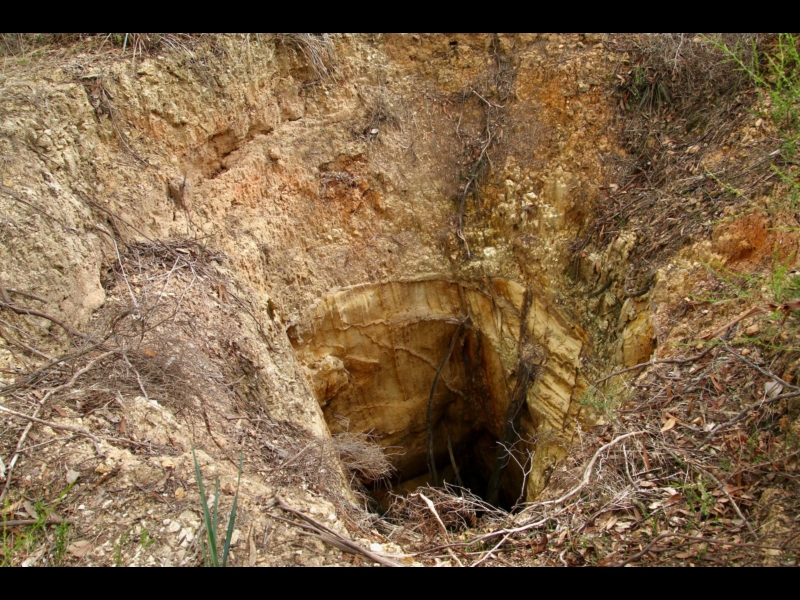 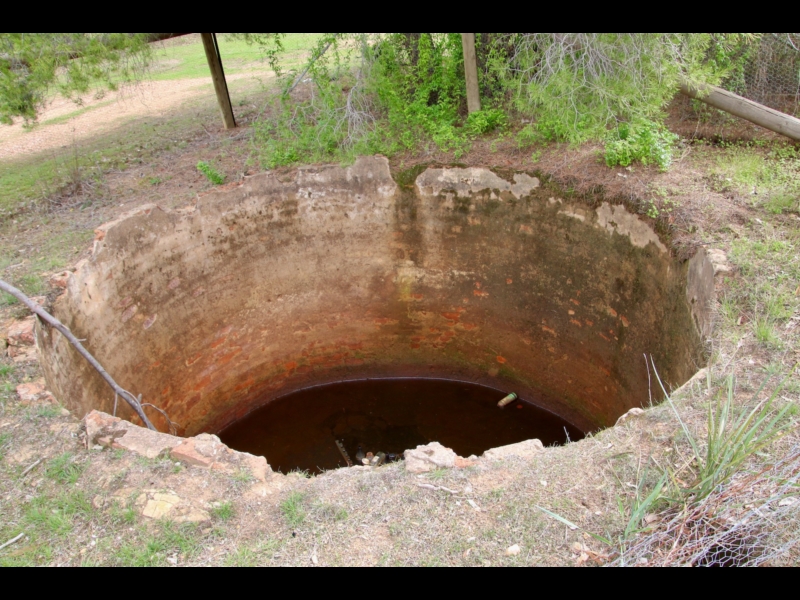 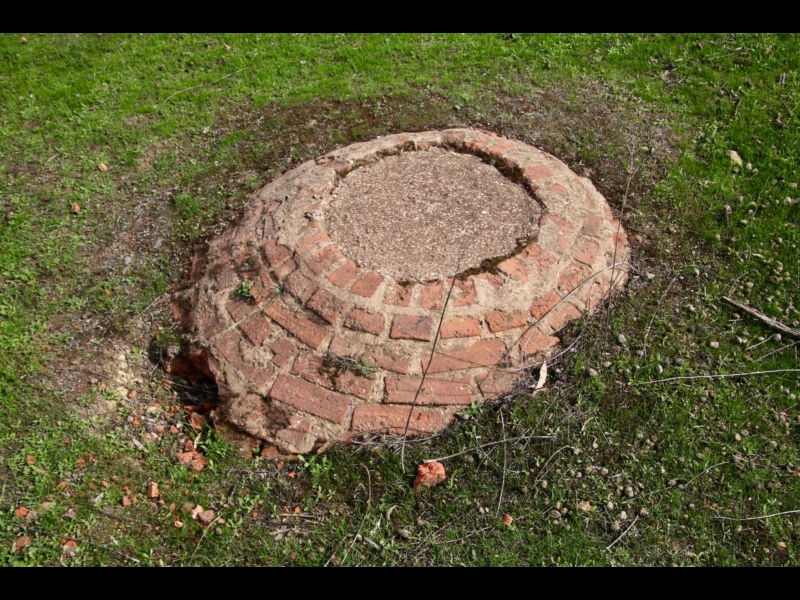 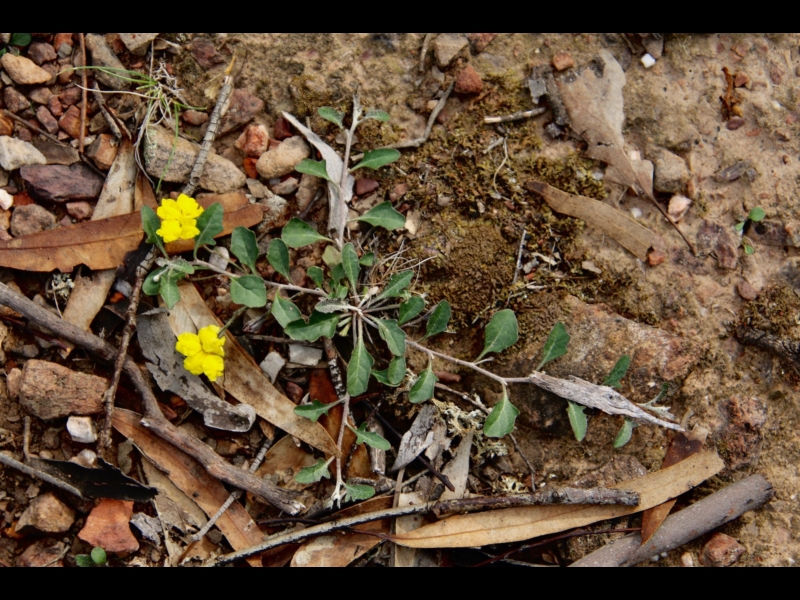 This is often a quiet, empty place of bushland, native flora and fauna. Exploration of the Whroo Historic Area Walk unearths evidence of a different, busy, crowded and culturally significant past.

This is often a quiet, empty place of bushland, native flora and fauna. Exploration of the Whroo Historic Area Walk unearths evidence of a different, busy, crowded and culturally significant past.

Start the walk at any point. The cemetery or central car parks are easiest.

The Nguraililam-wurrung people used ironbark for canoes, hunting implements, to construct shelters. Ironbark blossom made a sweet beverage. The name “Whroo” is said to mean "lips". This was apparently a reference to aboriginal watering holes in the area.

Balaclava Hill is the highest point in the Whroo district and was a rich mine. During the Silurian period, an intensely heated earth’s crust beneath the gold fields pushed volcanic rocks into extremely-hot salty water. As water moved closer to the surface and cooled, gold crystallised out with quartz. 600 million years later, quartz bearing gold veins up to 15cm across saw a 19th century fortune - more than £1,000,000 . Whroo is estimated to have produced 40,000 ounces of gold.

Gold was discovered in Rushworth in 1853. In 1854, a gold nugget was discovered in grass at Balaclava Hill by John Lewis and James Nickinson. The consequent goldrush lasted much of the decade, recurrently bringing thousands to try their luck. Gold mining began with alluvial diggings, proceeding to open cut methods. By 1860, a population of just 450 remained. The Balaclava Hill Mine continued to be productive until it was shut down in the 1870s due to water management problems. However, shafts have been mined since. The last active shaft was filled by the Mines Department in the 1960s.

In it's time, the Whroo township accommodated a Mechanic’s Institute, a state school, a post office, a savings bank, a free library, 2 churches, 3 ore crushing mills, 3 hotels and a cordial factory. 139 buildings were still present in 1871.

Rumour has it Ned Kelly and his gang visited the area. Prior to anticipated trouble with the local constabulary, it is said a cache of Kelly gold was stashed in the area and never found again …..

Whroo cemetery reflects the difficulties of life in a harsh environment, where neither age, nationality, culture nor religion provided protection. Chinese miners make up 15% of 400 graves. They were a significant part of the community as miners, puddling machine operators and market gardeners.

By the 1920s ironbark timber cutting was the principal remaining industry. By 1933 the population had fallen to just 52. By 1955, Whroo was a ghost town.

Parking at the intriguing cemetery is as good a place as any to begin and finish your walk. An alternative is to park and begin at the central car park. There are picnic tables at both places.

Grass tress are a special feature of this dry open woodland. You can't help but love them. Don't love them to death though. Stick to the track to avoid the spread of cinnamon fungus into the forest.

These rocky hollows were once spring fed. Now they only fill if it rains. With today's lengthy drys, they are no longer safe to drink from. They remind us of a different past.

Rubbish dumps have told many an archeologist many tales. This deposit of ceramic and glass fragments will have been picked over and over. Regardless, it still proves interesting.

A name to tell a story. The alluvial deposits were thoroughly worked over by successive waves of miners. Many left with nothing to their name.

This larger car park is in the middle of the 2 loops you can walk. There are picnic tables and a toilet. The Information Kiosk is no longer operational, but the verandah provides some shelter.

If you are a bird watcher or photographer, over 150 species have been recorded in Whroo. Different seasons bring different birding pleasures.

These landscape killers hump and bump all over the area. Imagining the manual effort required to move all this soil and rock with pick and shovel is a sobering thought.

Although some signs are looking a bit aged and jaded, there are plenty and they are still legible and useful for gleaning interesting facts about the space you are in.

The open cut of Balaclava Mine is a key feature of the site. Sadly, the risk of dangerous rock falls has become to great to allow entry to the mine. However, the 2 view points do not disappoint.

The water for Balaclava Mine washings came from this dam. Today it is home to tortoise, fish and water birds. Below the dam wall are good mountain biking tracks.

These machines were for separating gold from rock and dirt. Open use of toxic chemicals was the norm. Chinese labourers often worked this site.

The entire area is pock marked with mine shafts. Some have been fenced or covered over the years, but much of this work has weakened over time. Stay on the track.

14. Site of the Lewis Homestead

All that remains is a cistern and some cleared land. Visit the Menzies Hotel he built in Melbourne to see a more substantial legacy of the Lewis gold discovery.

As you walk around the old township you will see wells of various shapes and dimensions. Unlike this one, many remain as open cavities. Take care.