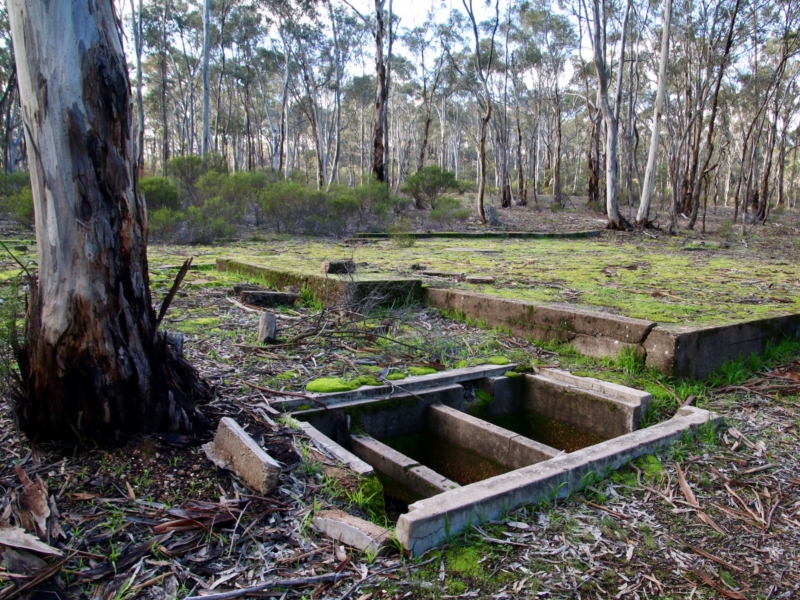 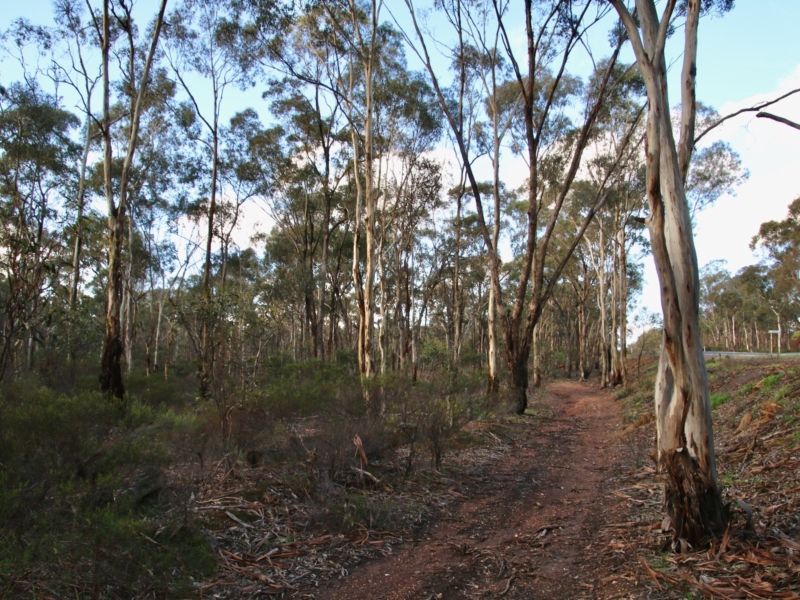 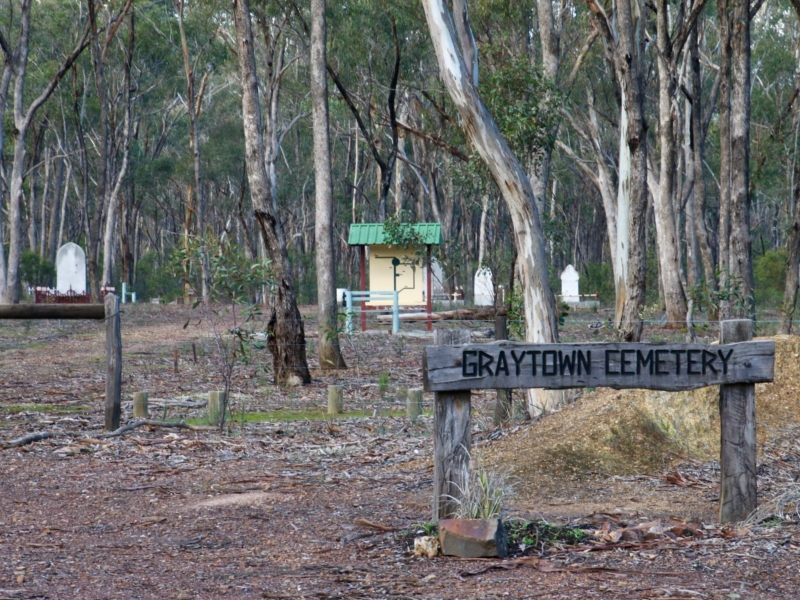 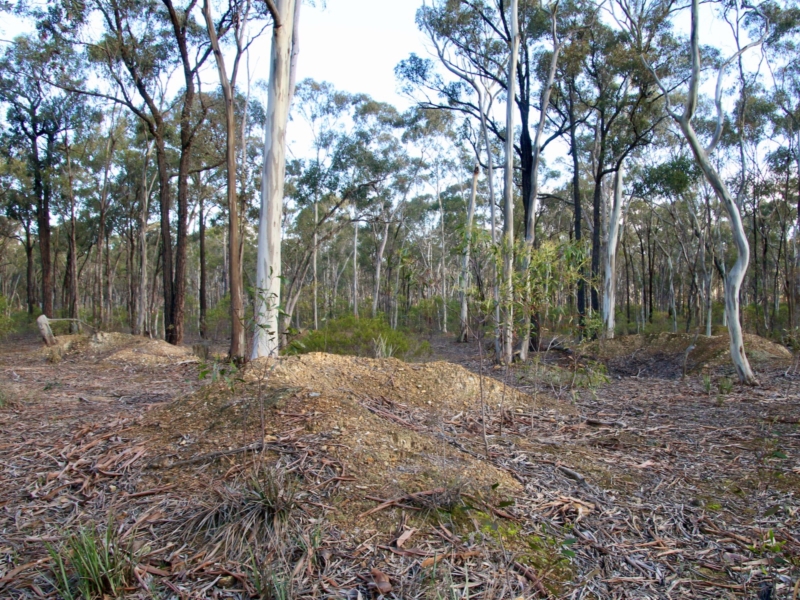 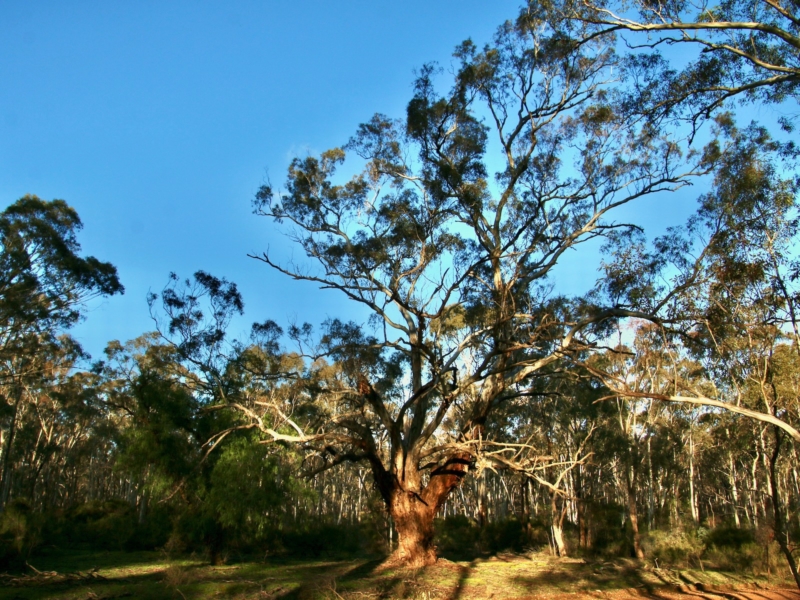 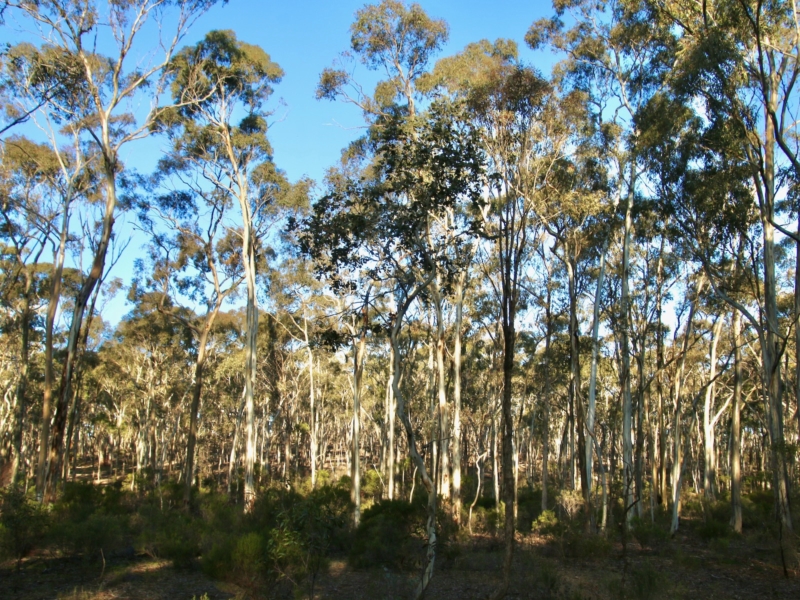 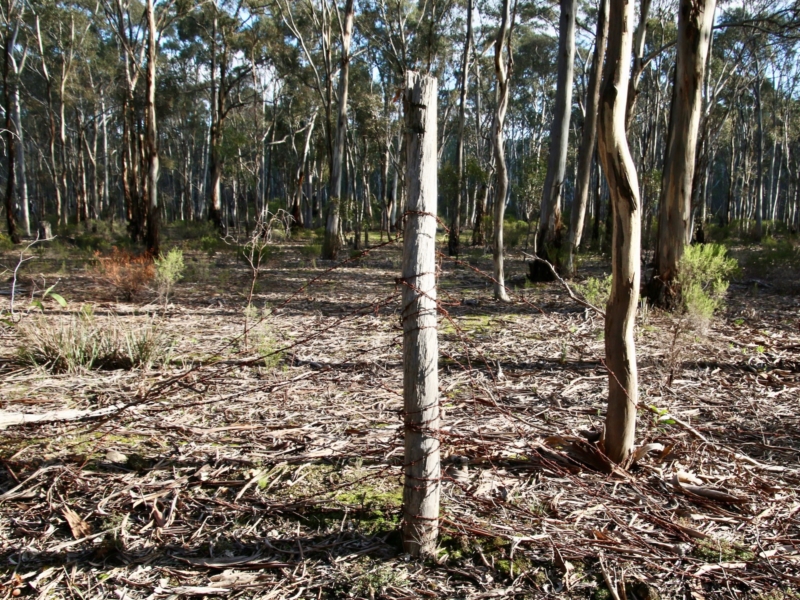 This intriguing history walk takes you through a WWII POW Camp site into Heathcote-Graytown National Park and onto the Graytown Cemetery. Return via Graytown gold diggings to close the loop.

This intriguing history walk takes you through a WWII POW Camp site into Heathcote-Graytown National Park and onto the Graytown Cemetery. Return via Graytown gold diggings to close the loop.

Graytown was known as Spring Creek when gold was discovered in September 1868. Within a few months over 30,000 people arrived. Stores followed, tents and shanties made way for wooden structures. By June 1869, there were 216 beer premises, 36 butchers, 14 bakeries, 17 general stores, 5 banks, 4 chemists, 5 doctors , 2 newspapers, 5 soft drink manufacturers, 10 drapers, 8 restaurants, 6 tobacconists, 10 boot makers, 6 timber yards, 18 blacksmiths, 2 watch makers, 3 ironmongers, 2 tin smiths and 72 unknown stores, a Cobb & Co Station and 19 Police Officers. Life was rough, illegal mining was a problem along with larrikanism. At its worst families had their children sleep on the floor to avoid stray revolver shots.

The diggings came to a sudden end, winter 1871. Flooding wreaked havoc. Most miners lost everything and moved on. Some hardened prospectors kept going into the early 1900s

The cemetery was registered June 3, 1870. Many were too poor to pay, resulting in unauthorised and unrecorded burials. There are many unmarked Chinese graves. The first burial was a 2 month old baby on June 21. Diarrhoea and mining related injuries were common causes of death.

Pressure to mine was so great it resulted in tunnelling under fences into the cemetery. Eventually, the cemetery size was reduced as a result. Consequently, graves exist outside the boundary.

During WWII a Prisoner of War (POW) Camp was established (Camp 6). Approximately 250 Italian and German POWs were detained. The German POWs were mostly crew members from the German raider ship “Kormoran” that sunk the HMAS Sydney off the West Australian coast in 1941. Some Finnish seamen were also held. The wreckages of the Sydney and Kormoran were found in March 2008.

Each compound was enclosed by a double row of wire fencing 2 metres high with coiled barbed wire in between. Guard towers stood at each corner and the perimeter was lit at night.

About 20 Prisoners were held in each of the timber framed barracks. Kitchens, mess huts, shower blocks, laundries and latrines were all located within each compound. Camps were divided to separate nationalities.

The surrounding forest has been cut for firewood since settlement. POWs were engaged cutting firewood in the forest. Timber cutting continued until the National Park was declared in 2002.

Foundations and wire are all that remain of the camp today.

Walk through the Camp, following the track below the main road to Graytown Cemetery Rd. When leaving the cemetery, take the track opposite the gate through the diggings. Turn left at the road to return to the camp.

Restrictions
No dogs
No firearms
No camping
No potable water
Take rubbish with you
Drivers/riders use formed roads, be licensed, be registered

Foundations of the compounds are all that remain of the camp today. Inspecting the site is certainly evocative.

There is no need to walk on the bitumen. Follow this track to Graytown Cemetery Rd.

A sheltered information sign outlines the history and the divisions along ethnic and religious lines within the cemetery. A clearly defined track leads you around. There are many unmarked graves.

The return walk of this loop takes you back through Graytown gold diggings. It must have been a tough life for most. Many buried in the cemetery died because of the working conditions.

Constant wood cutting after settlement means most of today's trees are not fully grown. This tree was spared. It gives us an idea of what the forest may have looked like had it not been decimated.

The intersection of Graytown-Rushworth and Heathcote-Nagambie Roads was once a thriving township of tens of thousands. Can you imagine it?

How fortunate we are that our largest Box, Ironbark Forest has been preserved along with unique historical sites and significant flora and fauna. It is well worth further exploration.