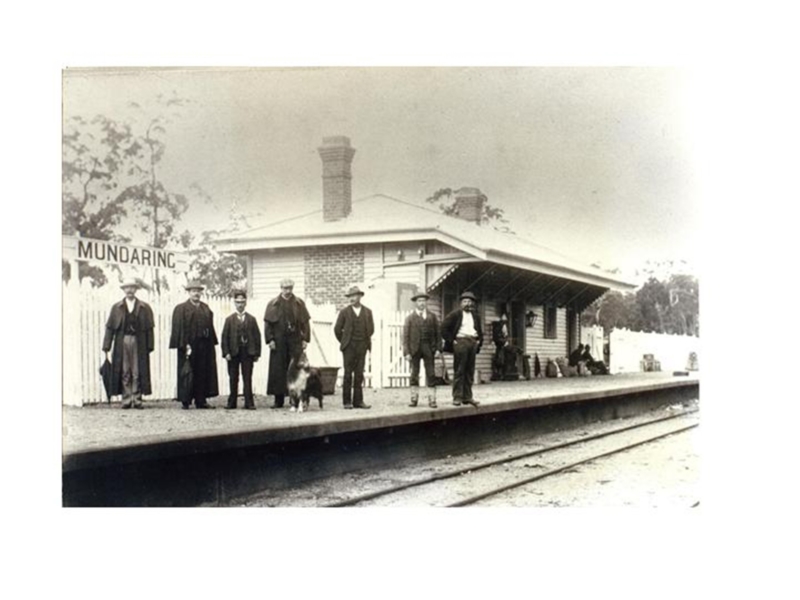 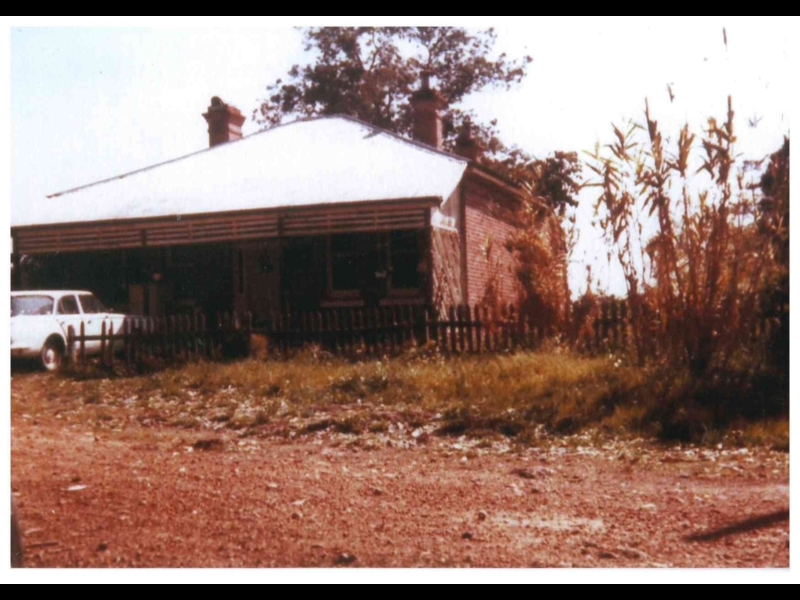 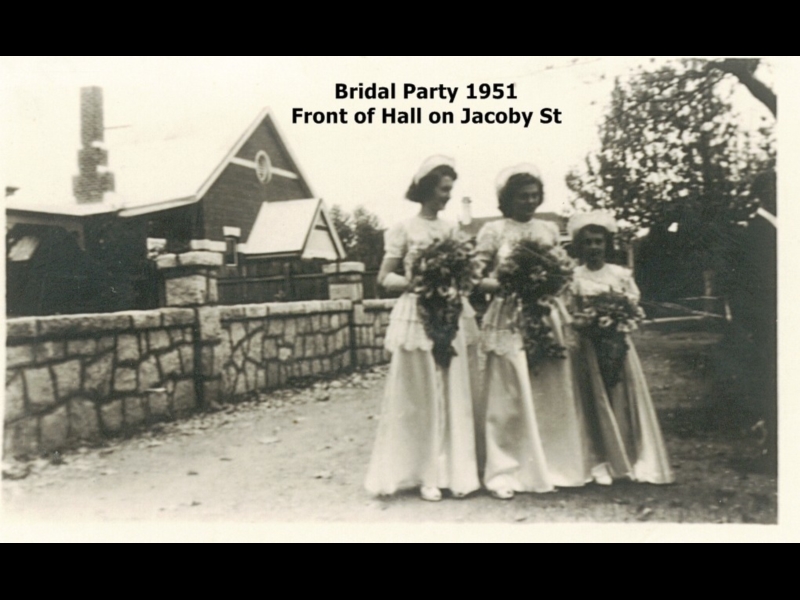 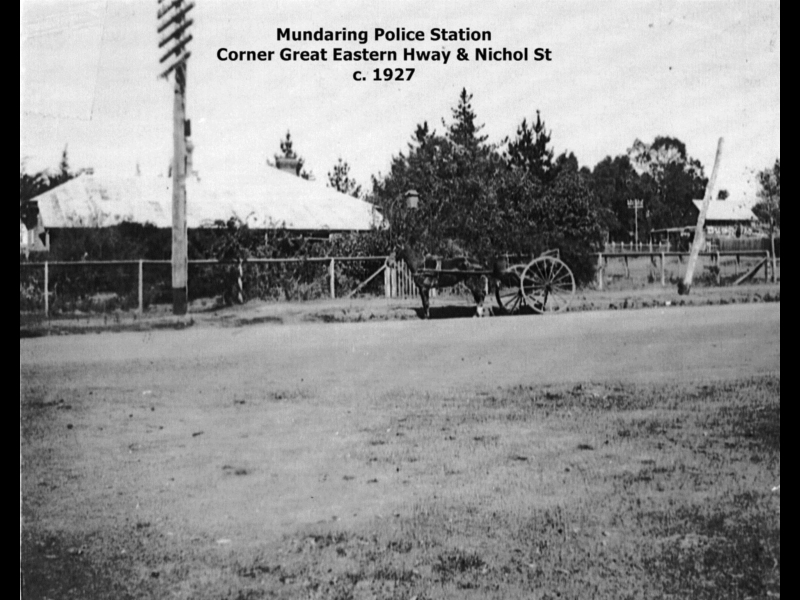 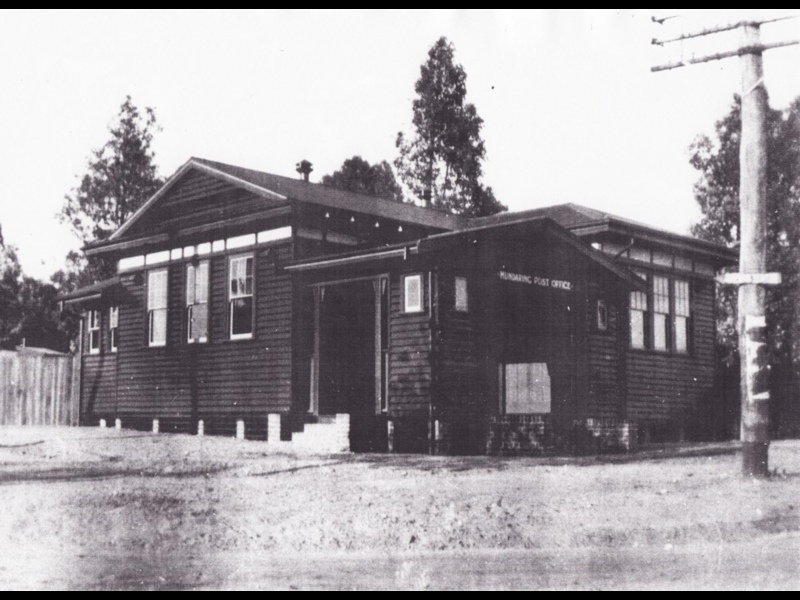 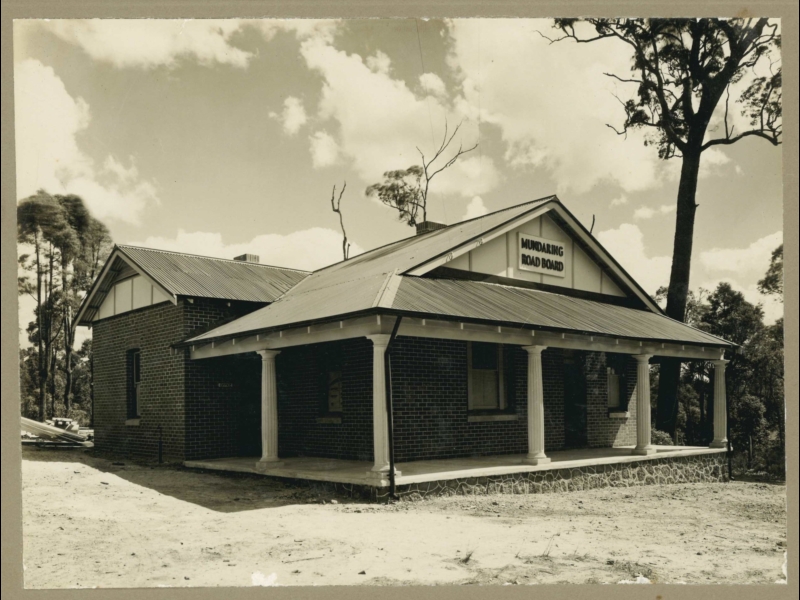 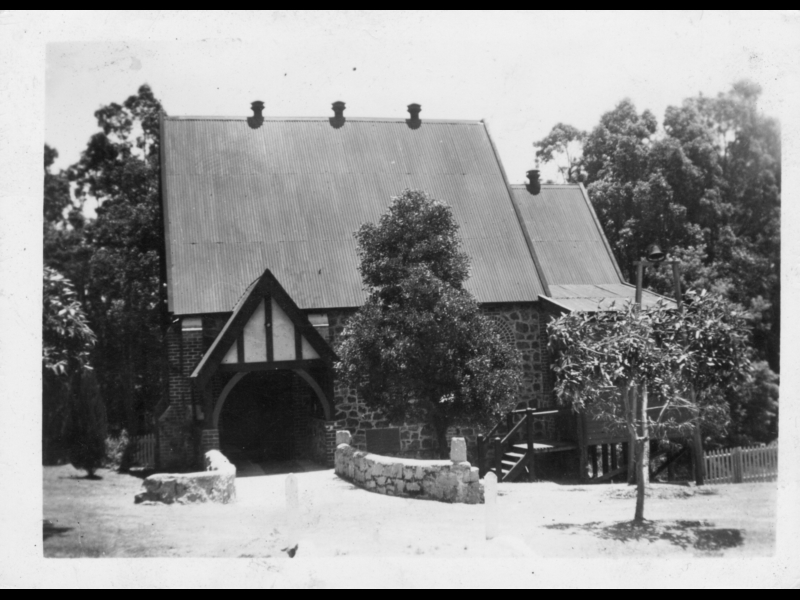 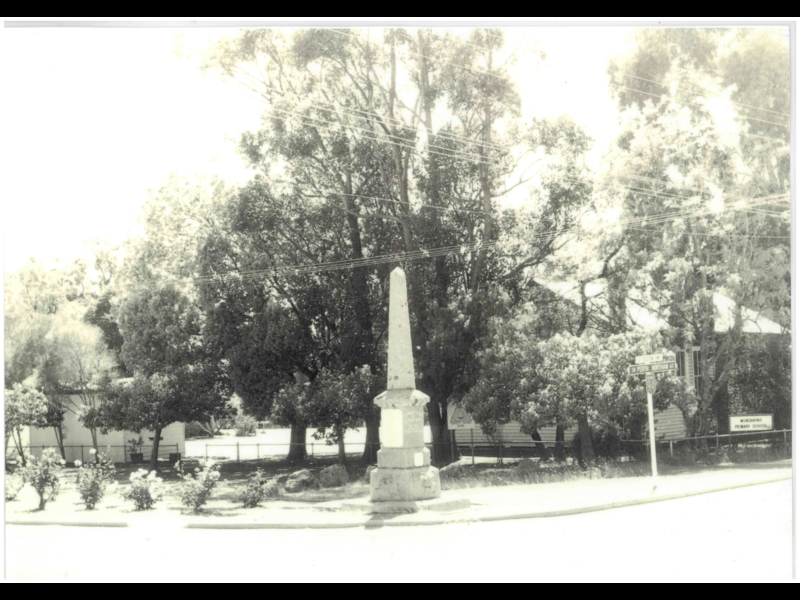 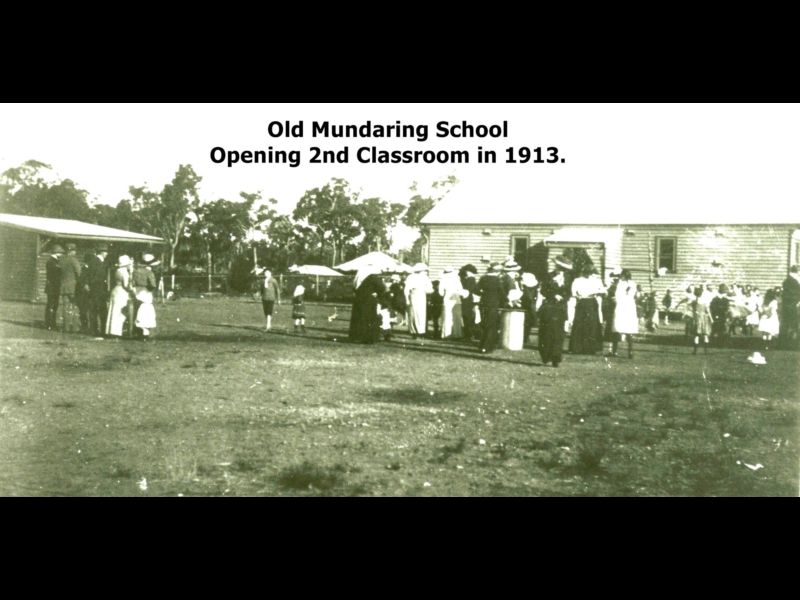 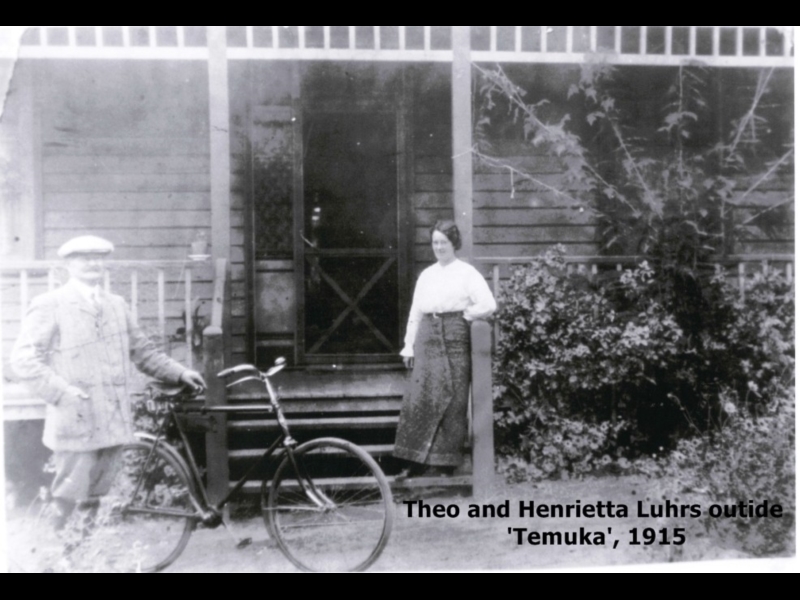 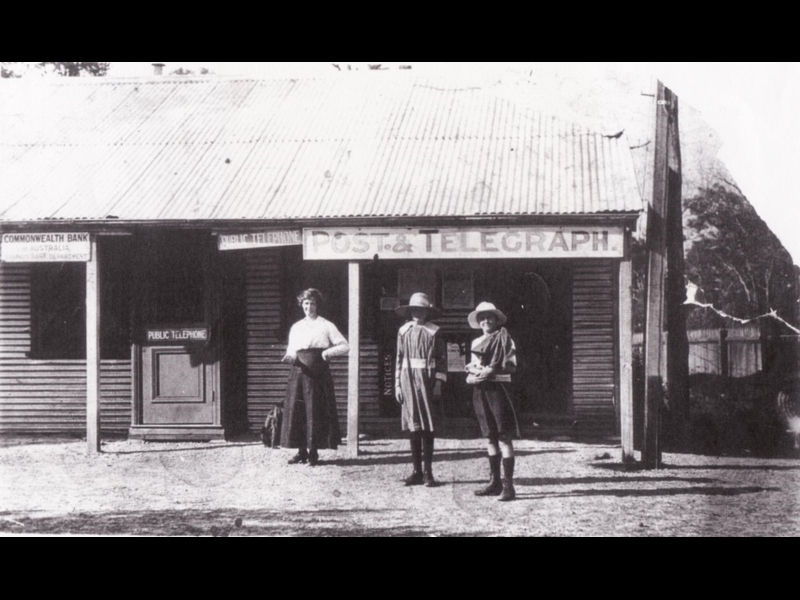 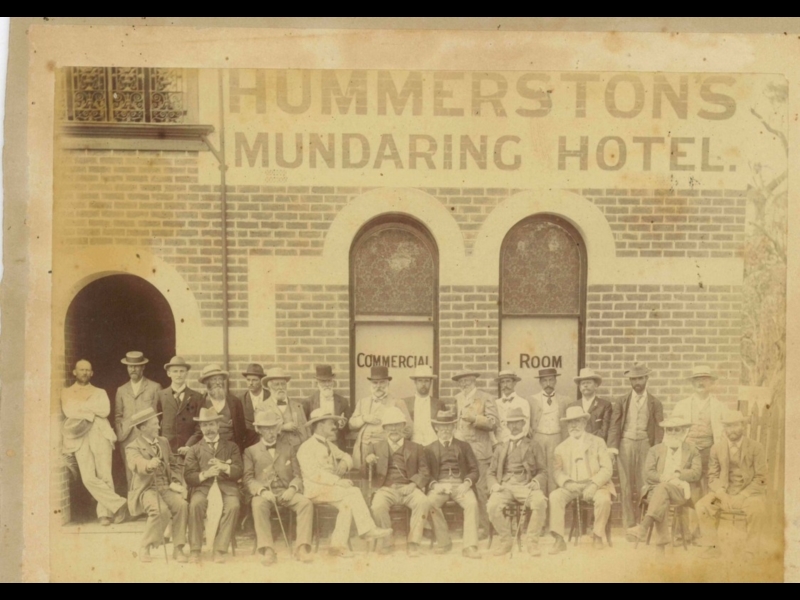 This short walk, starting and ending in Sculpture Park, takes you around the village of Mundaring and highlights some of the historic buildings of the area.

Mundaring is located 35 km east of Perth, Western Australia . It was declared a town-site in 1898. A convict road party often camped in the area in the 1870s and a few vineyards and orchards were scattered along valleys to the south. European colonisers moved into the area in the late 1890s when a spur line was constructed from the Eastern Railway line to the site where a reservoir for the goldfields water supply was to be built; what is now known as Mundaring Weir.

The Whadjuk Noongar people, the land's original custodians, called the general area 'Mundar-ing', with the first syllable emphasised. This meant 'a high place on a high place'. Over time pronunciation has changed to emphasise the 2nd syllable, 'air'.

Today Mundaring businesses are concentrated on Great Eastern Highway (formerly the old York Road), but originally the focus was further south near the train station. Mundaring Hotel was built at the junction nearest to the station and one publican there pioneered the holiday resort trade in Mundaring. Guest houses and cottages sprang up to cater for weekend visitors.

Mundaring became a leading resort area for those making day trips on the Sunday excursion trains and those who could stay longer. Leading Perth businessmen acquired weekend cottages in the hills. From there the idea of commuting from Mundaring took hold and over the years more and more people chose to live in the hills and commute to work in the city.

Some people settled in the hills so they could have a few fruit trees or chickens but others moved for their health. Guest houses championed the beneficial effects of the air 300 metres above sea level, encouraging permanent residents, including tuberculosis sufferers, as well as visitors. During the 1920s and 1930s, more residents moving to Mundaring led to more businesses and it is now the commercial and administrative centre of the Shire.

Sculpture Park occupies the former Mundaring railway station reserve. It has been transformed into a landscaped area with a playground, artworks, and railway features that link to the area's history

After the construction of a new railway station, a brick & iron residence for the station master was built. The remains of the station platform can be seen in the park. Now the offices of the MHHS.

Built in 1901, the Lesser Hall underwent additions in 1937 to create the building we see now. It has been used for school lessons, church services, dances, CWA meetings, and as a picture theatre.

A police station was first constructed here in 1903 . In 1906 a weatherboard and iron building replaced it. This was demolished in 1980, and replaced by the current Police Station.

Mundaring's 2nd Post Office, made from weatherboard and iron, was opened in 1926. In 1995 the Post Office moved to the Mundaring Shopping Centre and the Mundaring Arts Centre relocated to this site.

This site has been the centre for local government since 1926. Built for the Greenmount Road District, now known as the Shire of Mundaring, the original building was demolished in the 1980s.

This Anglican church was consecrated in November 1914. During the 1920s and early 1940s a new altar, altar room, parish room, and rectory (which is located next door) were built.

The RSL erected this monument in memory of the men from the district who were killed in WW1. The original rose garden was established in the 1930s, and a flagpole added in 1937.

In 1908 a one room school house, made from weatherboard and iron, was built here. A 2nd classroom was added in 1913. These classrooms now house the Mundaring District Museum, and the Visitor Centre.

This iron & weatherboard house was built by Theo and Emmelina Luhrs in 1911. It was soon a guest house, with the addition of a brick kitchen and dining room. Theo also built 'Belair' , 2 doors down .

The first Mundaring Post Office was built here in 1898. By 1912 it was also the Cwlth Savings Bank agency. The Post Office moved to Great Eastern Hway in 1926. The building was recently demolished.

Built by H A Hummerston in 1899, the 2 storey brick building became a popular weekend retreat in the 1920s and 1930s due to its proximity to the railway station.